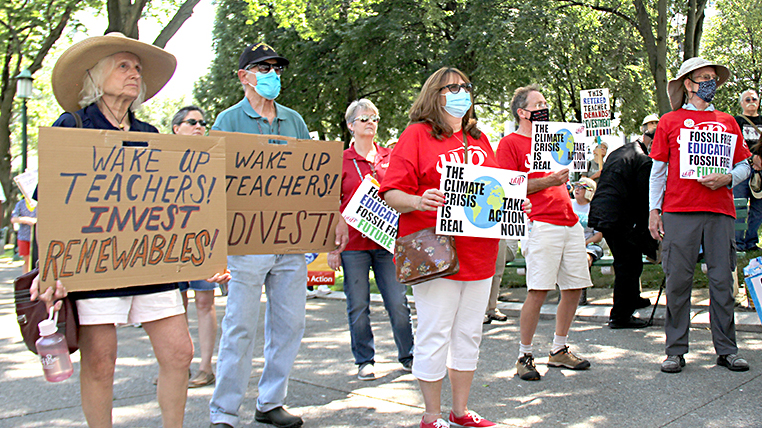 UUP has publicly called on the NYSTRS to divest of all fossil fuel-related investments.

Though the Legislature passed the Climate Leadership and Community Protection Act in 2019, any comprehensive environmental action has stalled awaiting the 22-member Climate Action Council's recommendations. No further ambitious climate bills have been passed since then.

"We cannot allow the Legislature to hide behind the CLCPA, claiming that they cannot pass additional climate legislation until the Climate Action Council releases its recommendations," said UUP President Fred Kowal. "These excuses are merely delay tactics, and they threaten the livelihoods of our generation and future generations. Additionally, with an estimated $4.5 billion invested in the fossil fuel industry, NYSTRS is doing their pensioners and the planet a disservice by continuing to invest in fossil fuels."

UUP has also made specific calls for the SUNY Retirement System to begin divesting from fossil fuel stocks. In January, more than 300 delegates to UUP's 2021 Winter Delegate Assembly passed a resolution demanding that SUNY pressure Teachers Insurance and Annuity Association of America to divest from such stocks. In June, SUNY Chancellor Jim Malatras announced plans for a working group to examine more socially and environmentally responsible investments for SUNY employees.

Demonstrators ended the rally with a march around the state Capitol. Other advocates left pro-environmental messages on the sidewalk in colored chalk.

“The inaction of the New York State Legislature on climate this session was an absolute disgrace,” said Caitlyn Carpenter, a student at Mamaroneck High School in Westchester County and NY2CL's Westchester regional field organizer. “Our state representatives must treat the climate like the crisis it is by passing legislation to move us off of fossil fuels as soon as possible."