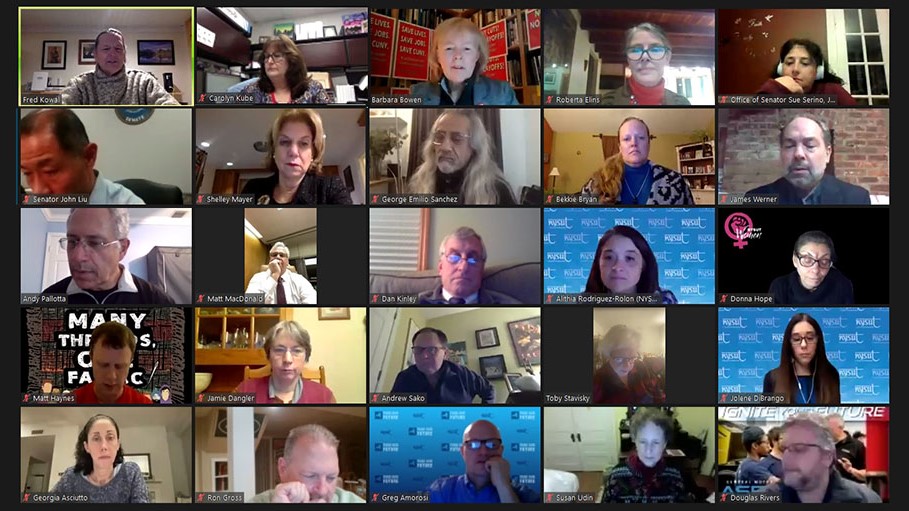 Even by the standards of a decade of starvation budgets for New York’s public higher education systems, the last year has been one of heartbreak, struggle and anguish.

In a Feb. 22 virtual advocacy event, and before an audience of nearly 200 lawmakers and higher education unionists, UUP President Fred Kowal and union leaders representing employees at CUNY and the SUNY community college system recounted harrowing stories of despair from the coronavirus pandemic.

They spoke of the deaths of colleagues, of essential workers stretched to the breaking point with double shifts, and of students who are barely hanging on as their families face displacement, unemployment and severe illness or death from COVID-19.

“SUNY, CUNY, and all of our members and colleagues have done, under the most terrible circumstances, amazing work,” Kowal told the audience in brief but impassioned remarks. “I only wish the executive budget had honored the work that has been done. SUNY faces a $46 million cut. Let us be clear: SUNY was never made whole after 2008. The federal assistance will be a help, but it is triage, it is not recovery.”

Kowal used his remarks to also press for key portions of UUP’s legislative agenda, known as New York HEALS , which includes a call for new sources of revenue for New York, through revisions in the state income tax code that would require the state’s richest residents to pay a fairer share of taxes.

Numerous UUP leaders also stood in solidarity with their fellow higher education unionists at the virtual advocacy session, organized by NYSUT and led by NYSUT President Andy Pallotta. Among those who joined: Tom Tucker, UUP’s statewide vice president for professionals; Jamie Dangler, statewide vice president for academics, and many chapter leaders and executive board members.

Two UUP Executive Board members, Carolyn Kube, president of the Stony Brook HSC Chapter, and Rebecca Bryan, membership development officer of the Cortland UUP Chapter, also spoke. Both described campuses that are fractured by making do with so little after years of negligent funding from the state, as well as the painful sight of colleagues who are exhausted, stressed and incredibly overworked, even as hundreds of them have sickened with COVID-19.

“Many UUP members were redeployed with sometimes only hours’ notice,” Kube said, as she described the plight of medical staff forced back into bedside care after years away from patient floors; medical residents suddenly promoted into attending positions, with a frightening amount of responsibility and no backup; and employees who have worked for a year without a break – some of them seven days a week for long stretches.

Those lawmakers who are friends to SUNY, CUNY and NYSUT face an uncertain time: The state has about a $15 billion budget hole that covers the remainder of this fiscal year and all of next year, and the SUNY and CUNY systems combined face potential cuts of $72 million.

While President Biden’s coronavirus relief package carries the possibility of emergency one-time funding, that package has yet to go before the Senate. The legislative process is long and painstaking with such a huge bill, and it is, as Kowal noted, the funding would be only temporary aid.

Barbara Bowen, president of the Professional Staff Congress/CUNY, noted that about 50 CUNY employees have died of COVID-19, which she believes is the highest death toll from the pandemic at a college or university in the United States.

Roberta Elins, a chapter leader at the Fashion Institute of Technology—A SUNY community college in New York City—is president of the SUNY community college faction of NYSUT. She and Bowen said that many students in their two higher ed systems have missed most of the spring semester so far, because their families are in upheaval with the pandemic and because it is nearly impossible to do remote learning in a crowded household with spotty internet reception, one digital device and no privacy.

Lawmakers listened intently, and the two who are key right now to the fate of the higher education budget in New York – Stavisky and Glick – pledged their strong support to the union leaders.

“We are definitely going in the wrong direction,” Stavisky said. “We’ve got to close the TAP Gap, and we are in discussions as to the best way to do it.”

“We cannot recover without a solid workforce that has been educated,” Glick said. “It’s time to rebuild our public higher education system. We have to do three things: fully fund capital needs; fully fund educational needs, and we have to solve the TAP Gap.”