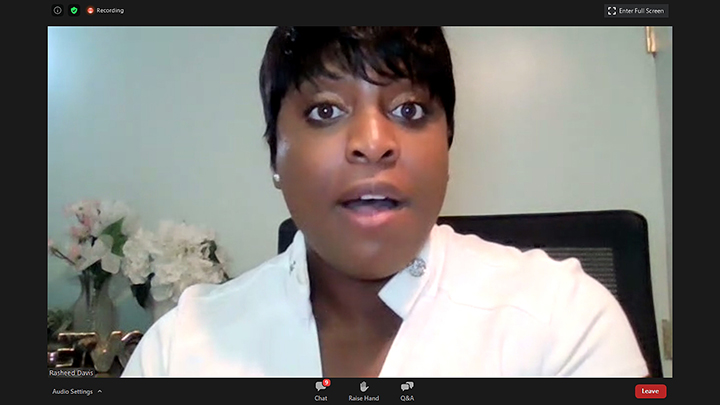 UUP is shining a light on a tragedy of Black families in this country: The high number of expectant Black women who face severe and even fatal health crises, and the terrible number of Black newborns who die in the first fragile days and weeks of life.

“This is really unacceptable,” said Dr. Christina Pardo, a UUP member and assistant professor of obstetrics and gynecology at SUNY Downstate Medical Center, where she is director of global women's health and social obstetrics and gynecology. “We know Black women have increased risk of pre-term labor, higher death rates from breast and endometrial cancer, and the highest rates of infant mortality. What we have finally started to acknowledge are the effects of racism and disparity in our communities. The hospitals in our Black and Brown communities are typically less resourced.”

UUP sponsored the workshop, which featured three SUNY health care experts, two of whom are UUP members. In addition to Pardo, the panel included UUP member Rasheed Davis, an emergency medicine physician’s assistant and a clinical assistant professor at Stony Brook HSC with a special interest in women’s health; and Dr. Camille Clare, the newly appointed chair of obstetrics and gynecology at Downstate.

UUP has called for long-overdue attention to the problem of Black maternal and infant health in its legislative agenda for this session, New York HEALS . As part of its health care focus in that agenda, the union is urging the state to expand the mission of Downstate Health Sciences University to be the state’s center of maternal and child services.

Additionally, the union supports passage of the Chisolm Chance Plan, which was introduced by state Sen. Zellnor Myrie, a Brooklyn Democrat representing the 20th Senate District, and which would create an administrative hub in Kings and Bronx counties to coordinate community-based organizations and community health workers to combat the maternal health crisis.

There is nothing new about the terrible numbers. Black women have long had a much higher rate of death during pregnancy and childbirth than white women.

Black women are more than 3 times more likely to die during pregnancy, childbirth or within 42 days of the end of a pregnancy than white women in the United States, according to the American Journal of Managed Care. The overall average of maternal deaths in the United States is 17.2 deaths per 100,000 live births; for non-Hispanic Black women, it is 43.5 deaths per 100,000 live births.

The U.S. Department of Health and Human Services has tracked similar—and similarly shocking—numbers that reveal an infant mortality rate for Black babies that is 2.3 times higher than for non-Hispanic white babies. The rates of babies born with low birth weight, and babies who die from sudden infant death syndrome, are both higher for Black infants than for non-Hispanic white infants, and Black mothers are far more likely to get either no prenatal care, or care that comes late in the pregnancy.

A promise of long-term change

UUP President Fred Kowal has pledged a continued push by the union to help change these appalling outcomes for Black women and infants, tens of thousands of whom are served by all four SUNY academic medical centers.

“When we call for the restoration of state support to SUNY hospitals, and adequate funding of our academic medical centers, it’s not just a call for support of services,” Kowal said. “It’s a call to address what our colleague Dr. Pardo correctly called a racial and economic disparity. These high-needs academic medical centers reflect a lack of attention by the state to low-income families. It’s a terrible injustice, and UUP will be working to change this, not just in this legislative session, but for the long haul.”