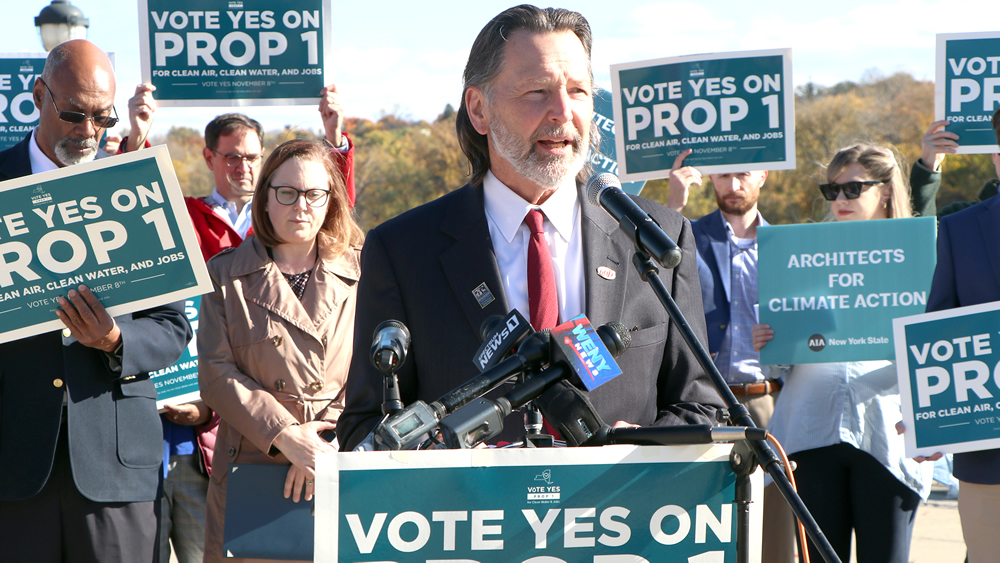 Several hundred environmental advocates in New York, including UUP, are urging voters to flip their ballot over this election and mark “Yes” on the question about the environmental bond act they will see on the other side.

In so doing, UUP President Fred Kowal said at an Oct. 27 press conference about the bond act, they will be voting for the wellbeing of many generations into the future.

“Why does UUP, a higher education union, support passage of the bond act?” Kowal asked rhetorically as nearly 50 members of the Vote Yes for Clean Water & Jobs coalition stood behind him and the Hudson River on Albany’s waterfront formed a dazzling backdrop. “One of the lessons of this pandemic has been its impact on public health. We have been advocating for a cleaner, more sustainable future for years. As educators and healers, we are always looking to the future.”

The Clean Water, Clean Air, and Green Jobs Bond Act, also referred to as Proposition 1 on the Nov. 8 ballot, would enable New York state to raise $4.2 billion through bonds to make generational investments that will support the environment and address a number of climate-change issues.

It would be the first environmental bond act in 20 years, and this time, it comes with a mission that was barely being discussed the last time: preparing New York to better handle massive changes to the environment and the climate, some of which are already underway.

The bond act would cast a wide net that would include the purchase of zero-emission school buses, improvements to water quality and infrastructure, open-space conservation and environmental improvements in disadvantaged communities. The bond act is also expected to create hundreds of union jobs in the state.

Acting on a future already here

If the bond act is passed, the state can also use some of the money to qualify for federal matching funds that will extend the bond act’s monetary reach by tens of billions of dollars. One such project: A proposed $52 billion project by the Army Corps of Engineers that would help the New York Harbor better withstand the stronger storms that started occurring more than a decade ago.

Aaron Mair, director of the Forever Adirondacks Campaign of the Adirondack Council, and a speaker at the press conference, noted that just one major storm –the 2012 Hurricane Sandy, which devasted the New York City metropolitan region—cost the state more in terms of its damage than the bond act will raise. The state cannot ignore what is not already on its way, but what is really already here, Mair said.

The bond act, he said, “is an investment that will offset these storms. New York state is in the hurricane alley corridor.”

UUP has long partnered with organizations in the state dedicated to addressing climate change and protecting the environment, and UUP has called upon SUNY to take a leading role in developing environmentally friendly technologies and taking a lead role in the state as an environmental advocate.

You can hear the full press conference in a special episode of UUP’s The Voice podcast. That podcast will be posted soon.

Watch the UUP website (uupinfo.org); the UUP membership magazines, The Voice and The Echo; and the UUP member newsletters, UUPdate and Connect, for upcoming events and actions by UUP on environmental issues.