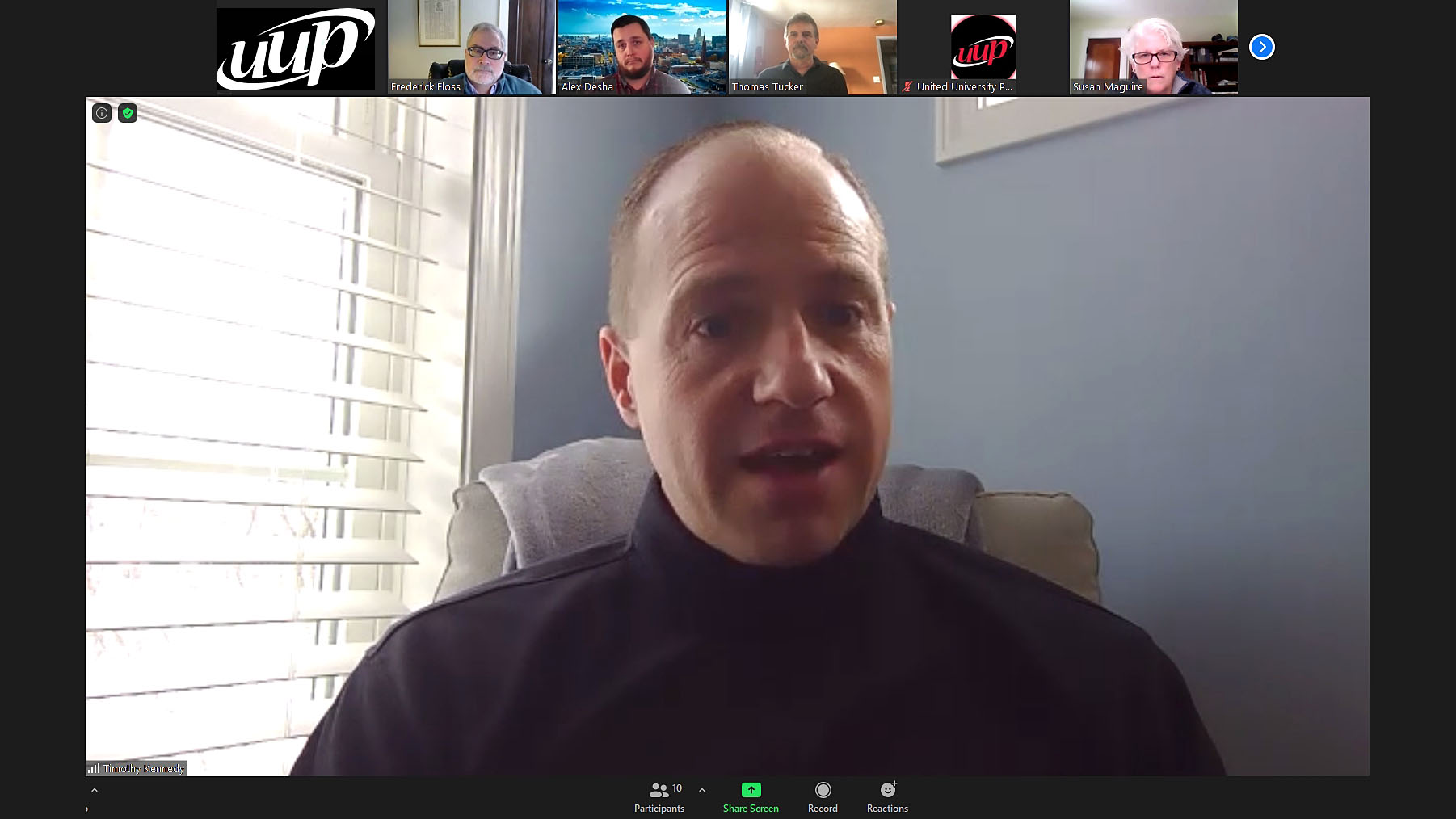 Much is uncertain about the fate of the SUNY budget for 2021-2022, but one thing is very sure: The University must fill a $46 million deficit to avoid massive cutbacks, nearly a year into its most difficult year ever.

With this fact in mind, UUP made a strong showing in the first day of its first-ever virtual UUP Higher Ed Lobby Days Feb. 11. Dozens of members teamed up to urge lawmakers to support UUP’s progressive state agenda—one that would not only address this year’s desperate finances but would lay the foundation for a long-term and realistic operating budget to help SUNY contribute to the state’s economic recovery for years to come.

“It is laudable that our members have been such strong advocates for their students, their colleagues and for SUNY, during a year of non-stop crises,” UUP President Fred Kowal said. “Our members have taken the lead through much of this pandemic in speaking up for what SUNY needs, and this union is grateful that they are doing it again during this extremely fraught budget year. We have a plan, and it’s good to know that lawmakers heard and listened to it.”

And listen they did, as members detailed dire circumstances to a receptive audience of lawmakers.

A few examples: Upstate Medical University is losing $600,000 to $700,000 a day because it has had to cancel so many elective procedures during the fall surge of the coronavirus pandemic. SUNY Brockport recently announced that it faces a $10 million budget gap, also the result of lost revenue and added expenses during the pandemic. Reports have come in from campuses around the state of non-tenure-track faculty being nonrenewed for the spring semester.

“It is so important that you are part of the discussion,” Marianne Buttenschon, a Democrat from the Assembly’s 119th District in the Utica-Rome region, told a delegation of members. “There’s no way we’re going to rebuild without you; you are one of the pillars. We can’t do the old status quo.”

A plan for now, and the future

UUP has put forth an ambitious but attainable state legislative agenda, called New York HEALS, which offers solutions to the budget crisis and details a plan to make SUNY more economically and environmentally self-sufficient. But it also fulfills one of the University’s main missions: To serve a diverse population by making programs and services more accessible to students, faculty and staff from underrepresented populations.

In addition to the budget deficit, UUP is tackling issues of equity with its agenda. “We think New York’s future depends on access to affordable, quality, higher education,” UUP Downstate Chapter President Rowena Blackman-Stroud told Sen. Jabari Brisport, a newly elected Democrat from Brooklyn. “We’re thinking about a program like the Medical Educational Opportunity Program, which could draw underrepresented students. There’s a real need for primary health doctors in the community.”

Brisport told the delegation that he supports new sources of revenue that would tax the state’s richest residents, one of several receptive responses that members heard during the day.

UUP plans a second Lobby Day Feb. 12. Next week, UUP members will join with students for four days of virtual advocacy during Higher Ed Action Week, an event being organized by the New York Public Interest Research Group. Watch UUP’s website at uupinfo.org for updates on that effort.