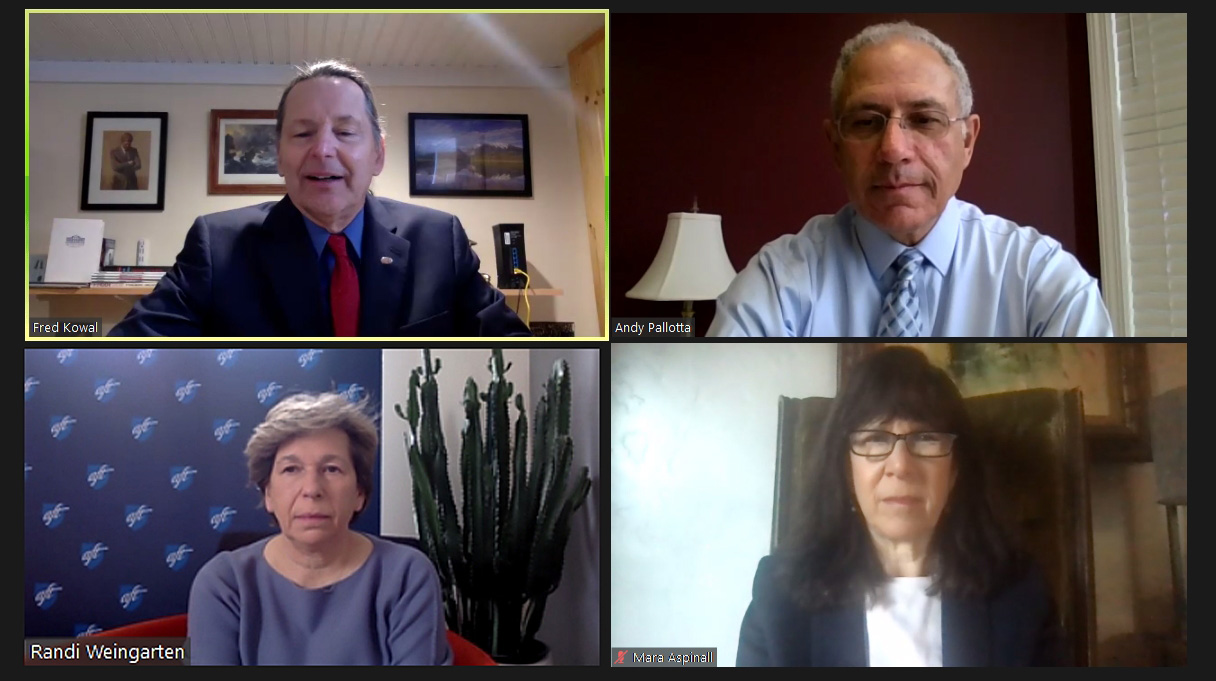 The weekly coronavirus testing of SUNY faculty, students and staff that UUP successfully pressed for and achieved last fall has also become a statewide model of the right way to help prevent outbreaks of COVID-19 in schools.

UUP President Fred Kowal made that point at a March 4 news conference as he stood in support of PreK-12 school leaders from around the state and around the country to call for a uniform testing policy in school districts in New York.

“At SUNY, every student, every staff member, every faculty member, is tested weekly,” Kowal said. “This pandemic is a killer. We are calling, with our colleagues at NYSUT, for extensive, aggressive [PreK-12] testing. It is the only way we can continue to do what we love to do, to teach, and to touch the future.”

NYSUT President Andy Pallotta also said that testing is the only way to keep schools open. “It’s clear we share a common goal: the best way for teachers to teach and students to learn is to back in the classroom. The tests are the best way to identify asymptomatic people.”

Of the 700 public school districts in the state, Pallotta said, only 57 regularly test students, teachers and staff for the coronavirus. New York needs a statewide mandate for testing in public schools, he said.

A great idea—but no one listened

UUP first issued a call for frequent testing on SUNY campuses last June, as part of its proposed guidelines to reopen campuses in the fall. With the void in SUNY leadership last spring—then-Chancellor Kristina Johnson was about to resign, and was largely unresponsive to concerns about the pandemic in the final weeks of her chancellorship—the UUP plan generated no response from SUNY.

It was not until James Malatras was appointed chancellor in the late summer that UUP had a forum to present concerns and ideas. Kowal has frequently praised the teamwork that Malatras has made possible between the union and SUNY administration.

Even with testing, this virus fights back

Mulgrew and Smith spoke about the aggressive coronavirus testing policies in place, respectively, in New York City schools and the NFL. Testing cannot quell the pandemic—both systems have struggled with frequent outbreaks of the coronavirus and, in the case of the New York City schools, frequent shutdowns of schools—but both leaders said that testing had prevented massive, overall outbreaks and closures.

Weingarten also praised Kowal, Mulgrew and Smith for taking aggressive stances on behalf of their members when it came to testing.

“You just heard from three union leaders who have had to deal with, ‘How do we reopen?’” Weingarten said. “They have shown that you can do this if you do it safely. But you have to do it right.”