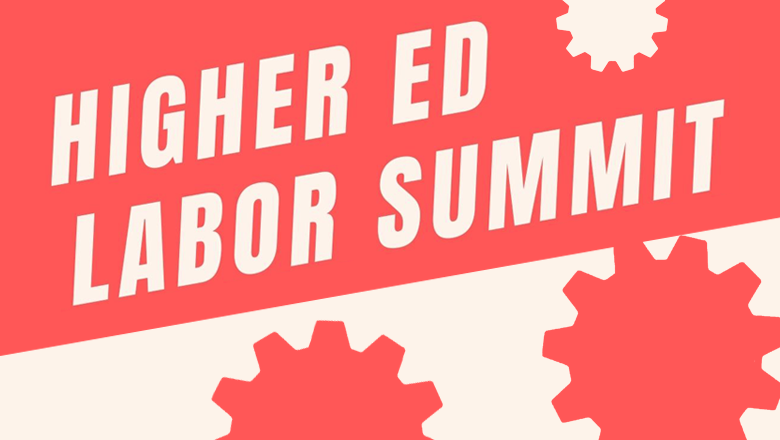 As colleges and universities around the country emerge from the coronavirus pandemic, the people who teach at them, from tenured professors to graduate assistants, are collectively realizing they don’t want to go back to “business as usual.”

And that desire for change has galvanized 10 national and international public higher education unions comprising 75 locals—including UUP—to come together and make change happen. They started on that process with a virtual national summit, July 7-9, which has produced a platform of actions and goals which the unions plan to pursue.

UUP President Fred Kowal, the first in an impressive lineup of speakers on the Higher Ed Labor Summit’s opening day, called the end of the pandemic an “urgent turning point for higher education” and added that the investment in higher education is an investment in the nation’s recovery from an unimaginably difficult time. He evoked UUP’s own legislative agenda, New York HEALS (Healthcare, education, access, leadership and sustainability), in telling the hundreds of participants that higher education can and must be a leader in addressing climate change and creating a more diverse health care profession.

“Hopefully, we are learning from this terrible time,” Kowal said. “You all know our nation is divided; each of us must be an instrument to foster a better society. As this coalition, we wield so much power to end racism, and to diversify our higher education systems.

“I really believe we need a national solution and strategy for higher ed, because we are a national asset,” said Kowal, who was joined at the summit by other UUP members from throughout the state.

Nationally, 700,000 higher education workers lost their jobs during the pandemic, according to statistics tracked by a number of higher education news sites and advocacy groups, which began compiling reports of job cuts as early as April 2020. The most vulnerable went first: adjunct faculty with few job protections, and low-wage non-academic campus workers such as food service positions. The cuts came as campuses converted to mostly or entirely on-line education, starting early in the spring 2020 semester and continuing through the last fall semester, a move which left campus dorms, stores and eateries mostly empty.

UUP members saw this happen firsthand, and they responded. At Potsdam, for example, about 130 of the 145 non-unionized workers who staffed campus dining spots and shops were laid off in 2020. The Potsdam chapter members and chapter staff collected enough money to purchase $7,000 worth of gift cards to give to the suddenly unemployed workers of the Potsdam Auxiliary and College Services so that they could purchase food, groceries or other necessities.”

(For the full story on this and other tremendous efforts by UUP members during the initial shutdown, click here Here

Summit organizers: Cast a wide net to reach many

Summit attendees say that their movement will be effective only if their coalition represents a broad category of higher education settings and employees, including community colleges, adjunct faculty, graduate teaching assistants, and tenured or tenure-track faculty at four-year research campuses. The platform produced by the summit calls for federal support for higher education and for the realignment of campus governments away from an administrative-central system and toward a system in which faculty and staff have a great say in governance. To achieve these goals, the unions plan to focus on the passage of federal legislation, and policies and rules within the U.S. Departments of Labor and Education that support reduction of student debt, collective bargaining by higher education employees, and aim to diversify higher education while recognizing its historic role in marginalizing Native people and communities of color.

To these goals, Kowal added in his remarks at the closing briefing that higher education cannot focus only on internal issues such as the balance between adjunct and tenure-track faculty; it must also be recognized as a valuable and beneficial part of society.

That value to the larger community was certainly the case with the SUNY system during the pandemic, when UUP members staffed SUNY hospitals, produced innovative designs used to treat COVID-19 patients and, in the case of Dr. Frank Middleton at Upstate Medical University, played a lead role in developing a test for the coronavirus that enabled large numbers of people to be tested much more quickly and efficiently, using a pooled system of saliva testing.

“It’s my firm belief that for this movement to really revitalize higher education in the United States, that we create the means to have stronger, healthier communities,” Kowal said. “It’s a challenge I’ve offered to UUP—we have to take on the big challenges.”

The coalition of unions that organized the summit plans to be a national presence that lasts long beyond the opening event. Watch for updates from UUP on the progress of this movement, in which UUP had a lead role.